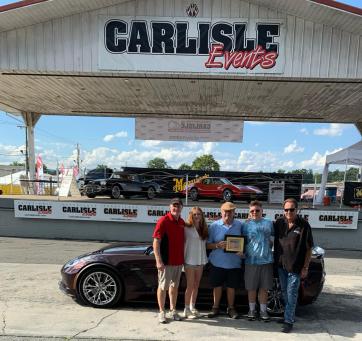 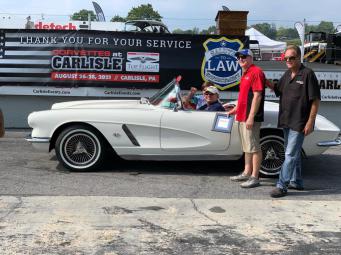 Congratulate John G. for receiving a Celebrity Choice Award for his 1962 white roadster from Lance & Bill Miller, organizers during the Grandstand Winners Parade, Saturday, August 28th at Corvettes at Carlisle. 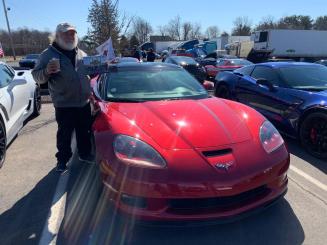 There were approximately 50 cars.

CJCC member Norm S.' 1999 C5 Torch Red Corvette Coupe won a "Sponsor" trophy at the Cops and Rodders car show held at DeVry University, Route 1 North in North Brunswick. There were over 350 great cars there including a lot of very nice Corvettes.

Club VP and Club NCM Ambassador, Bruce's C.'s October 2018 car show win which is included in the Enthusiast Area of the NCM as part of their looping display. Look forward to seeing it when our group arrives at the NCM's 25th Aniversary Bash.

Club Vice President and NCM Ambassador Bruce C. with his 2015 Torch Red Z06 which picked up a first place C7 trophy at the Woodbridge Corvette Club Show on Sunday, October 7, 2018.

Their Corvette was selected from many entries to the invitational display of '67 Corvettes at Corvettes at Carlisle to celebrate the 50th anniversary of the 1967 model year. August 24 to 28, 2017.

Club President Rich B. with the trophy for his his 2001 Magnetic Red convertible "Best in

Club Lifetime Member Joel K. with his 2017 Daytona Sunset Orange Coupe with his 3rd Place trophy in the C7 class won at the "Corvettes On the Circle" car show at St. Armand's Circle in Sarasota FL on May 6, 2017.

At our August, 2016 Club meeting, our Club NCM Ambassador, Bruce C., reported that the NCM is asking clubs (via the NCM eNews) to send information and photos of members' Corvettes which have won awards at car shows during 2016 for an exhibit they are creating. This would be timely for us since CJCC is making a trip to the NCM in October. Entries were due by August 22, 2016.

Below are our Award Winners as they are being shown in the NCM exhibit and also a file of our Club's submission. There are a total of 47 Corvettes included (click for link to all 47). The exhibit is a rolling slide show in the NCM Enthusiast Center and will run until August, 2017 when they will ask for another submission.

Recently "just for fun", Norm Stern entered his “new” Torch Red C4 coupe into a judged local car show on July 16, 2016 put on by the Hollywood Night Cruisers at Piscataway High School. Just like that it won its first trophy. And there were six other Corvettes in the show as well, but his got the trophy.

John G. wins a third place trophy in the "Modified Class" with his Ermine White '62 at the Beach Bums Corvette Show at Beach Haven, NJ on June 12, 2016.

Jim P. with his original and one owner 1973 Yellow C3 with his "Best in Show" award from the Long Valley Pub at Long Valley, NJ at our Time and Distance Rally on June 6, 2015.

Bob F.'s '03 50th Annniversary Edition Corvette Convertible. The six trophys on the deck were won in 2014 and 2015 in shows in Florida where Bob is also a member of the Gulf Coast Corvette Club. In 2015, Bob was a driver for a WWII veteran in the Flemington, NJ Memorial Day Parade. (Note the CJCC flag.)

Meetings every 3rd Wednesday of the month (ex Dec) at:

CJCC banner for National Corvette Museum 25th Anniversary. Click to see all of the banners at the NCM.